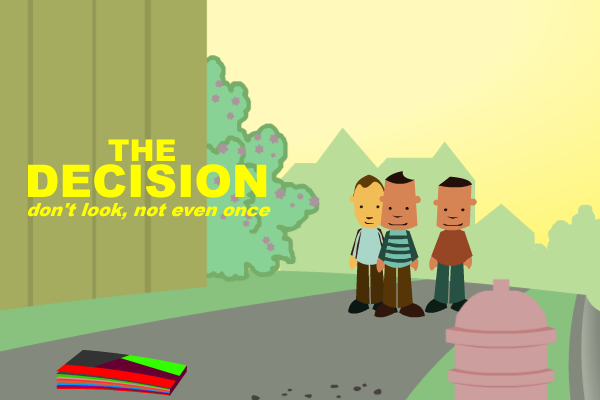 Donate Online to “The Decision”

On Friday, September 17, 2010, I launched a public funding campaign for “The Decision,” a story adapted from the Friend magazine dealing with a change encounter with pornography.

With the modest goal of raising $2100, each donor is being asked to contribute one dollar to this unique project and then invite two friends to do the same. “The Decision” is the second short film in series of 5 stories to be produced from content first printed in the Friend magazine, a monthly publication of the Church of Jesus Christ of Latter-day Saints. Once completed, the project will be presented to both BYU Broadcasting and the LDS Church’s web department as potential distribution venues. The completed series will also be available for download purchase online when completed.

The story’s as pure and innocent as one could find. The take home message: The decision to avoid pornography is simple. The kids in this story are fortunate– on their first encounter with a pornagraphic magazine, they’re influenced by each other and a quiet voice within to do what’s right. Additionally, they’ve the influence of good parents to reinforce that decision after the fact.

My immediate family has already pledged their support for this project with generous initial contributions.  I feel that there are many others out there waiting for projects like this to come around, but the sobering reality check is that they need to be funded. I am hopeful that my promotional efforts are enough to spread the word about this exciting and worth while project.

Brent is married to a very supportive woman, is father of a large family, and went into business for himself in 2006.